Metros with the most energy-efficient buildings

OhmConnect used the Environmental Protection's Agency's 2022 rankings to identify the metropolitan areas with the greatest number of Energy Star-certified buildings. 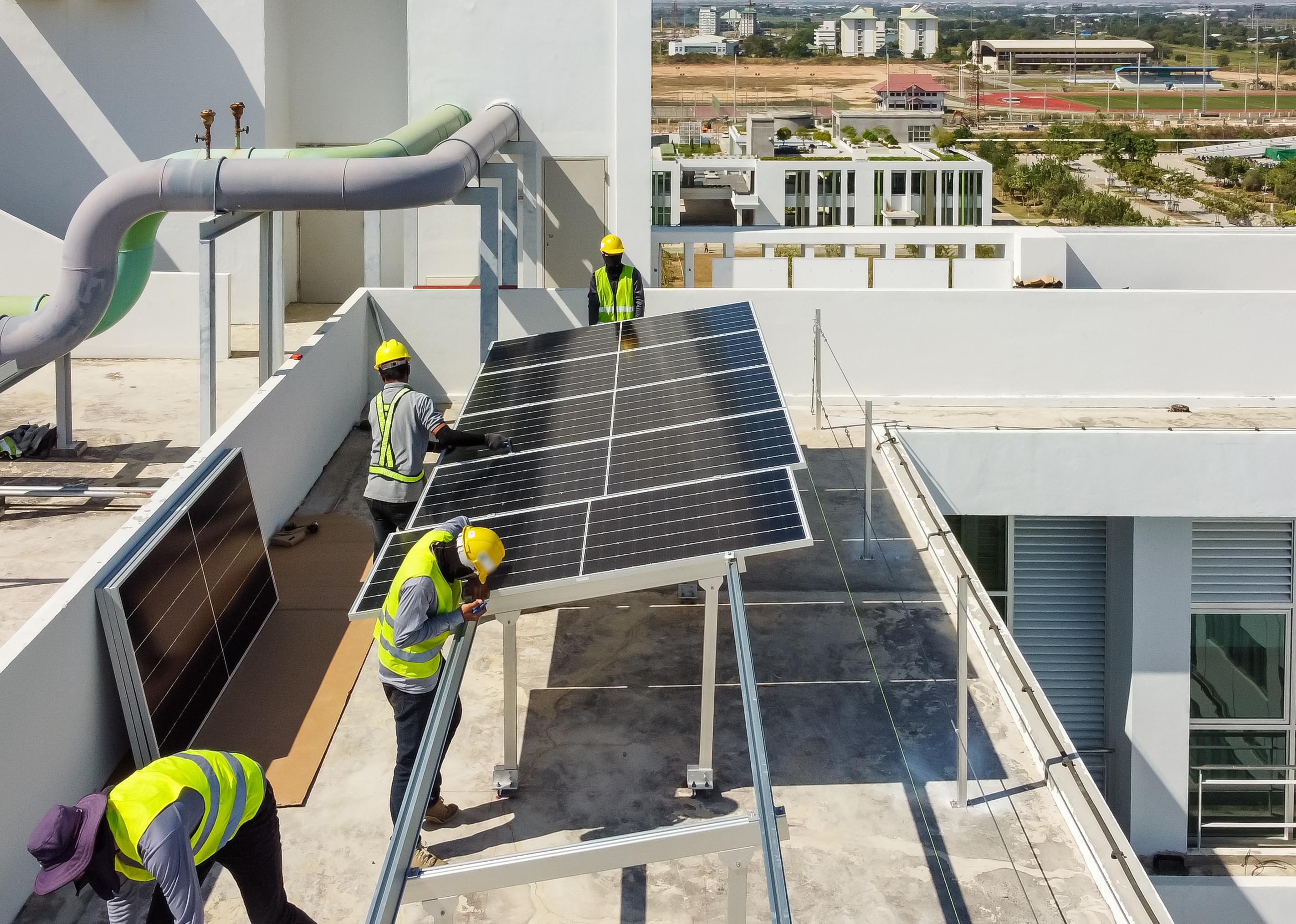 The overwhelming majority of scientists agree that the world is facing a climate change crisis. Americans are deeply divided—largely along partisan political lines. They disagree about how impactful they believe climate change effects will be and what to do about it. But one area where there's more agreement is green construction, where tax breaks meet energy savings. In general terms, green construction, which includes the planning, designing, and constructing of an environmentally sustainable building.

One key measure of taking a green approach to building is being classified as Energy Star certified. Buildings in the United States may become Energy Star certified by exceeding a minimum score set out by the U.S. Environmental Protection Agency. This score is calculated based on energy usage and mapped against EPA tools, and must be renewed each year. There are unique and detailed criteria for single-family, multifamily, and manufactured homes.

Civil and landscape engineers also rely on Leadership in Energy and Environmental Design, or LEED, which encourages renewable materials, energy savings, and protection of biodiversity. Each phase of planning and construction has its own LEED rating system and scorecard, against which engineers can measure their efforts.

Los Angeles leads the way with the most energy-efficient buildings, but Provo, Utah, has the most buildings per capita 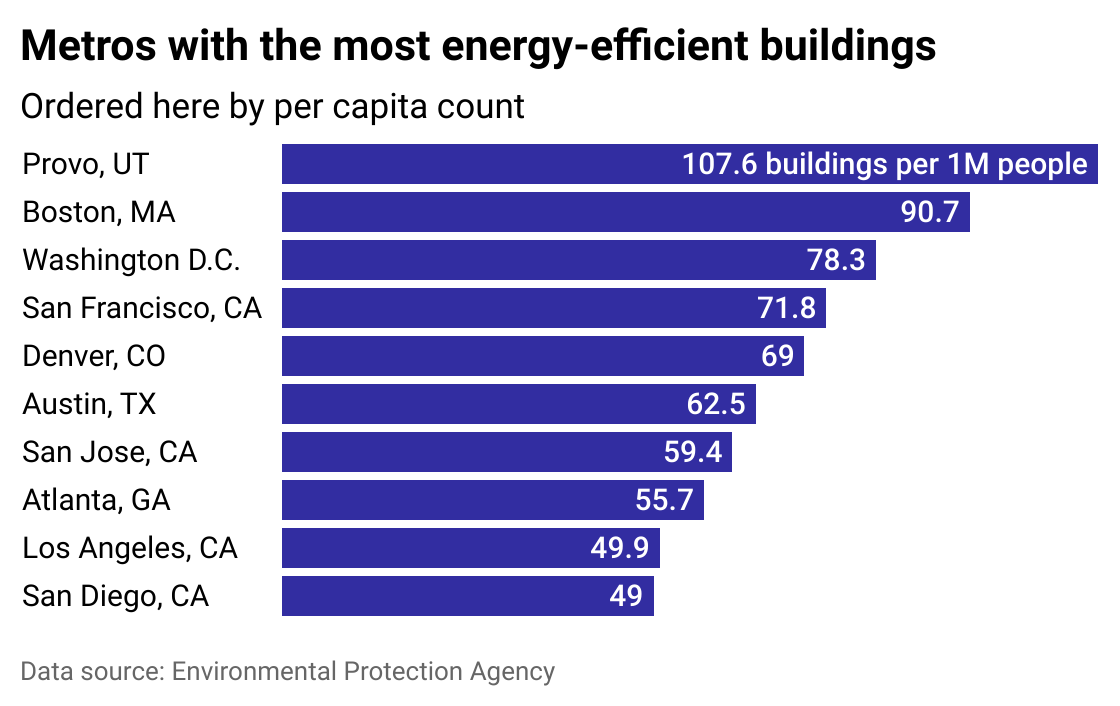 One thing to keep in mind about this chart is relative population size. Provo's adjusted number of energy-efficient buildings per 1 million people is just over 115,000 people—relatively tiny compared to the other cities shown here. The city has 75 total energy-efficient buildings, ranking 21st on the EPA's list. With white residents comprising 85% of the population—and about 90% who are Church of Jesus Christ of Latter-day Saints members—the city is home to Brigham Young University and several other flagship LDS programs. The LDS church officially supports energy-efficient building, including through the influential U.S. Green Building Council's LEED standards. 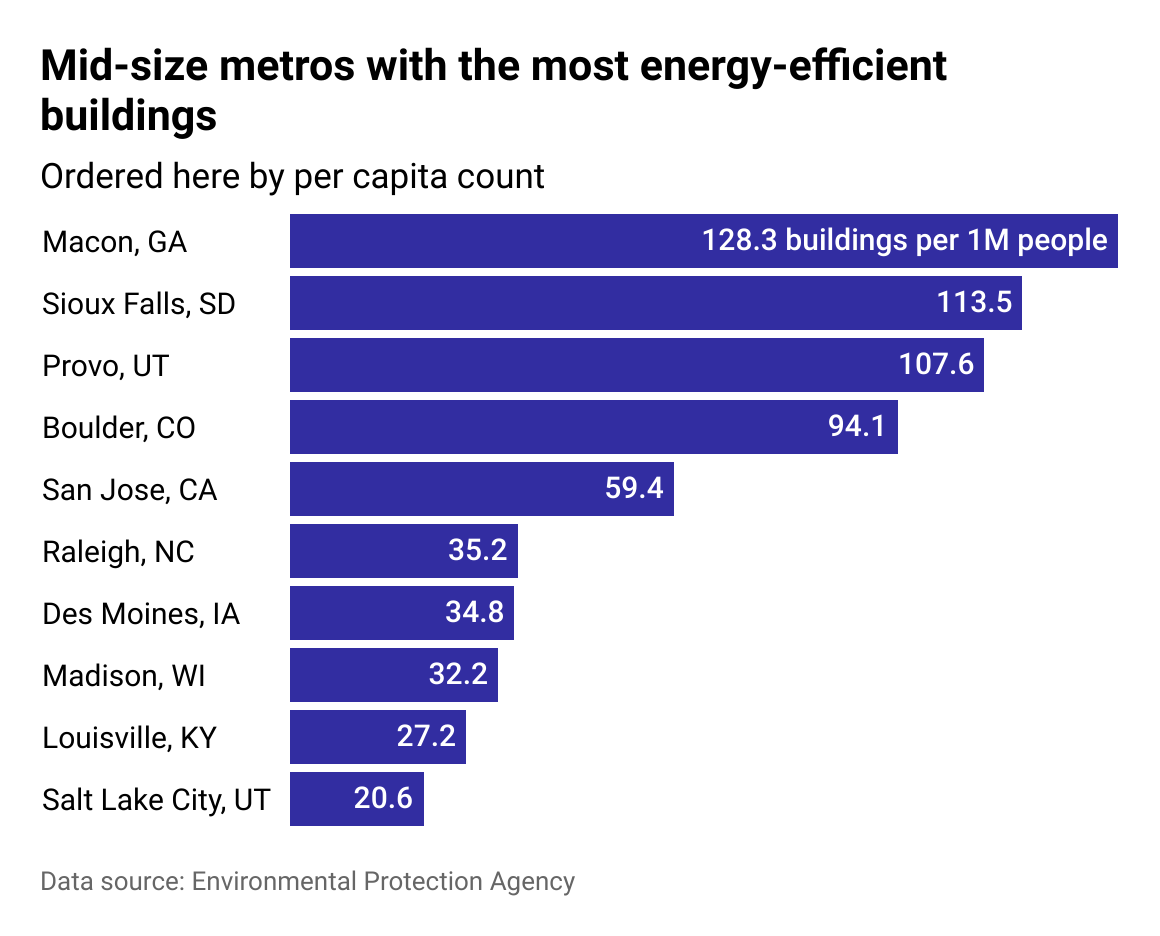 Macon, Georgia—which leads the mid-size cities with the highest proportion of energy-efficient buildings—is home to a fairly large number of college students and the staff and faculty that support them, most notably at Mercer University. The city is also less than 20 miles from Robins Air Force Base—Georgia's largest industrial complex—and has six hospitals.

The state of Georgia has more than 300 businesses and organizations participating in the Energy Star program. Smaller, standalone cities can often be more flexible about building energy-efficient new construction, as they tend to build smaller facilities with fewer zoning restrictions. In Macon, for example, among the ES-certified buildings are Central High School and multiple elementary and middle schools.

Midwestern metros make up nearly half of the small city rankings

Building an energy-efficient industry is seen by many as the future niche of American manufacturing. This is particularly true among the Midwest states, where a number of programs offer resources and encouragement toward energy-efficient building and other modes and methods of sustainable energy use, among them the Save Energy Now Partnership Program. One goal of this program is to "reduce the energy intensity of industrial manufacturers in the Midwest region." A great number of local government programs exist throughout the country, notably in the Midwest, to help builders leverage Energy Star tools and achieve certification. Popular among these is a reporting requirement on all buildings used by state employees via Energy Star's Portfolio Manager.

This story originally appeared on OhmConnect and was produced and distributed in partnership with Stacker Studio.

8 Tips to Rethink Clean at Home and On the Go